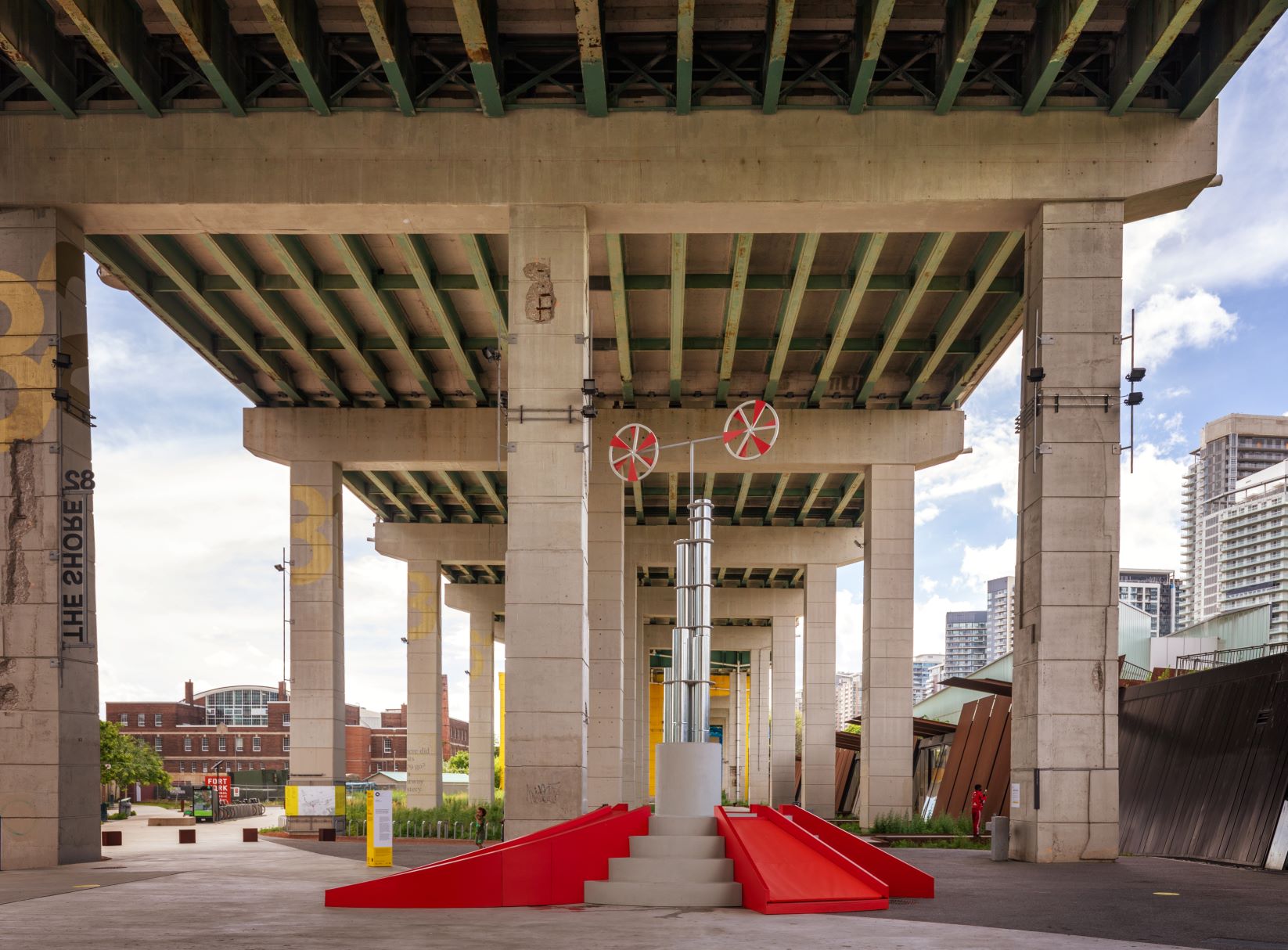 In 1968 the architect Lina Bo Bardi produced an evocative illustration of her design for the Museum of Art, São Paulo (MASP), depicting a number of play objects occupying the public space created by the structure of the building itself, which was elevated on four striking ‘stilts’.

The sizing of the play objects is unusual, depicted as they would be in the imagination of a child, rather than to any realistic scale. This is a fantastical universe, one rendered impossible by the political context in which MASP was built, where such collective expression writ large was in reality unthinkable. As such the drawing is a tool to speak about civic life under military rule and the power that the lens of childhood allows in thinking about the making of alternative worlds and a space designed for inclusivity.

Inspired by this now famous drawing, this project interprets and makes real one of the play sculptures from Bo Bardi’s original illustration acting as a device to challenge the civic context found at The Bentway. Assemble considers play to be a form of critical enquiry; Bo Bardi’s image is inspiring because it demonstrates a way to imagine, create, and live an impossible reality.

Co-Commissioned by The Bentway Conservancy and Nottingham Contemporary

Click and drag to look around the space, click on the circular arrows throughout the space to move around, and use the scroll wheel on your mouse to zoom in and out.

Assemble is a multi-disciplinary collective working across architecture, design and art.

Founded in 2010 to undertake a single self-built project, Assemble has since delivered a diverse and award-winning body of work, whilst retaining a democratic and co-operative working method that enables built, social and research-based work at a variety of scales, both making things and making things happen.

Thank you to our partners:

Twelve locations throughout the Play Path and neighbouring spaces

As an organization dedicated to the creation of shared and inclusive public space, we acknowledge that our work takes place on the treaty lands of the Mississaugas of the Credit and the traditional territory of the Huron-Wendat, the Haudenosaunee, the Métis, and many other Indigenous nations.

Tkaronto, “the place in the water where the trees are standing”, is now home to many diverse Indigenous people. We recognize them as the past, present and future caretakers of this land. We would like to pay our respects to all who have gathered and will continue to gather in this place. We are grateful to have the opportunity to work together to care for The Bentway lands and act as stewards of the space.

As of June 11, 2021 our washroom facilities are open from 10am – 7:30pm daily. Face coverings are required. Gender-neutral washroom(s) available.

Free Wi-Fi is provided by Beanfield. Sign onto Beanfield1hfree and get one free hour of WiFi at The Bentway.

The Bentway is free and open to the public every day.